The Crucible of Kavanaugh

And now to business:


In Star Trek: The Next Generation there is an episode where Data, an android, is threatened with being disassembled and examined so that a Star Fleet scientist can recreate him en masse.
In defending him, Captain Jean-Luc Picard delivers a great line:
“Your honor, the courtroom is a crucible; in it, we burn away irrelevancies until we are left with a purer product: the truth, for all time.”
So let’s burn away the irrelevancies to two related truths.

THIS IS ABOUT KULTURKAMPF

The Left long ago realized that Americans wouldn’t go along with their progressive program.  So they infiltrated the courts, metastasized through the media, and took over education to program the next generation.  Part of that, the first, was to impose by judicial fiat changes Americans wouldn’t accept: abortion and same-sex marriage, for example; additionally, to swamp the native uncooperative population with a flood of immigrants who would be more amenable to their permanent rule; How the Left Wins Elections by Transforming Nations.
So a Rightward-leaning SCOTUS, with younger judges who would serve for decades, is anathema to their LONG GAME fundamental transformation of America; Surprise: Democratic Operative Admits Derailing Kavanaugh is Really About 'Saving' the Supreme Court from Trump: 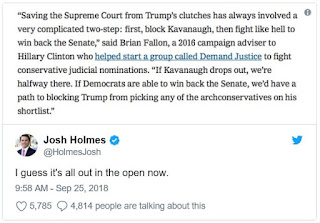 CHILD SACRIFICE TO TWO DEITIES
Abortion is, quite literally, child sacrifice.  It is the deliberate extinguishing of a human life; a child sacrifice to the twin gods of convenience and sex.
As I wrote in Part V of my Red Pill Journey:
Only by denying that fundamental truth, that inside a mother is a child, is abortion possible.  And only someone with no soul could look at such an image, see that pulsing heart plus hear it, and not feel twin cloaks of love and responsibility settle on them… which is why abortionists are so dead-set against showing such images.  That’s why they fight, tooth and nail, to tell pregnant women that it’s “just a clump of cells”.  Because it’s how that nascent life is dehumanized that sets the stage to be able to kill it. 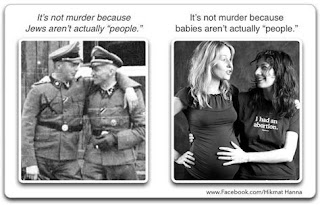 The Left worships two things.  Power – to remake America into what they believe with be the great Socialist utopia… despite it never having been done before.


And the animal’s pleasures of the flesh.  Sex without consequences, rut without end, and will kill the most innocent among us to preserve that.
If they’ll kill babies to preserve their ability to have sex without consequences, what will they do to those who they view, increasingly, as their domestic enemies standing in the way of their "scientific" creation of heaven on earth; The Scarlet “R”?


"Don't be fooled. this has not been an accidental strategy. It has a clear purpose. The purpose is not criticism of Conservatives nor a discussion of the issues; the purpose is to paint Conservatives as the ultimate evil. … If Conservatives are the ultimate evil, then shouldn't people of good will do something to make sure that that evil is erased from the face from of the earth? … Their minds [are being] prepared to [… accept…] that by eliminating Conservatives, they [… will be] ridding it of a disease. So, if you think about it and history, the greatest atrocities have been preceded by the preparation of people's minds. This is what we're seeing today. This is the nature of this war."


"I do not coexist with cancer; I do not find common ground with gangrene.  The Left must be fought and destroyed, or America dies."