I am still having trouble with replying to comments on my own blog.  So, this is in reply to his comment.


No, I have not heard of that documentary (Europa: The Last Battle).  It sounds interesting and I’ll look it up… I can’t guarantee when I’ll get to it but let me state two things.


First, I am a Zionist.  I believe that Israel has the right to exist, and exist securely.  But let me be very clear: Zionism is, or at least should be, about Israel.  The rest of the world, meh.  Israel is for the Jews, and any Arabs that are willing to peacefully co-exist – genuinely co-exist, not “co-exist spewing Taqiyya and Tawriya”.  In parallel with this…


Second, I already despise the Globalists.  I’ve excoriated Barbara Spectre, George Soros, and have recently become aware of the Kalergi Plan - which is beyond belief (but sadly also believable given the evidence).  More broadly, without citing numerous sources, I’ve learned that the Elites in Europe saw the devastation of WWI and WWII, and came to the conclusion that if nations fighting nations in devastating wars is bad (and it is), then the only solution is to eliminate nations.  And since – citing caustic but IMHO very often right talk show host Michael Savage – what defines a nation is “borders, language, and culture” to eliminate nations one must eliminate these.


And what’s the “best” way to do that?  Democide of the native population through massive population migration, interbreeding, and just demographic swamping by a more fecund new population.


Borders: Free migration of peoples.  Just look at this; UN Migration Compact expected to say migration is a “human right”:


That would mean there would no longer be various migrant categories like refugees, asylum seekers, economic migrants and certainly no more illegal aliens.  If the UN-supported planners have their way, anyone can move anywhere effectively, of course, wiping out borders.


The last is what they have been after for eons.  No borders.

Language: Just to cite America, we have no official language.  In Europe, Arabic – the language of the invaders – is being taught.  Just one example; Arabic language is the second most spoken language in Sweden:


The reason for this may lie in the large number of refugees increasingly settling in Sweden in recent years. Some prominent linguists who closely follow all of the trends of languages ​​in Sweden, have a logical explanation about this, that maybe someone deliberately wants to tear down the primacy of Finnish as a second language in use in Sweden and for the Arabic language to come in its place.


I remember, many years ago, getting lost in Miami – this being in the days before GPS.  I went into a 7-11 just to ask for directions.  Nobody knew, or admitted to knowing, English.  Fortunately they did have maps for sale and I managed to dope my way back to the highway.  But despite being, nominally, the USA it was, in functional fact, not the USA.


Culture: Citing Bill Whittle, Western Civilization is built on Judeo-Christian morality, Greco-Roman philosophy, and Anglo-Saxon law (and I side with him though I’ve seen only the first two discussed as well).  So; Progressives Are Using Mass Immigration To Destroy America (bolding added):


The incompatibility and the declared refusal of some immigrants to integrate along with their continual demands that the host nations give up their long established Judeo-Christian heritage and cultural practices to accept alien and often barbaric ones has had the effect of degrading the very fabric of the developed nation states.


And not just by demographics, but with an encirclement-style attack on every aspect of traditional Western culture: abortion on demand, the corruption and diminishing of religion, the denigration of marriage, societal acceptance of homosexuality (not tolerance, which I favor, but societal sanction), political correctness, taking over the schools, infesting the courts… it’s an assault with so many simultaneous thrust axes my mind boggles when I step back trying to see that “big picture”.


A LOGICAL, BUT COMPLETELY WRONG, CONCLUSION


Yes, WWI and WWII were monstrous horrors.  But the conclusion on how to avoid world wars is completely wrong, and not just wrong, but immoral.  Their plan is demographic and cultural murder – knowingly and intentionally.


France, Sweden, Germany, Italy, Spain, and other western European countries are cracking under the strain.  More to the point, their native populations are cracking as well; civil conflict across Europe is inevitable (links in the original):


France is 'on the verge of a civil war' which could be sparked by a mass sexual assault on women by migrants, intelligence chief warns, and Sweden is in a low-intensive civil war, and Delingpole: ‘Civil War Is Coming to Europe’ Warns German Politician citing three examples.


If the goal was to eliminate wars, this is not the way.  But then, perhaps the goal is different:


When that happens, what will happen?  Civil society falls; cities, regions, whole nations, and perhaps even the entire continent – with possible spillover beyond that – will dissolve into violence and chaos.


And out of the chaos will come the “great Socialist Utopia”.  Never mind that untold millions will die; the end of paradise on earth will justify the means.  These people are, literally, insane.  They seek the destruction of the greatest civilization the world has ever known in pursuit of what has never been, and can never actually be.


The parts of the snake must join, or die, against these mortal enemies of all I – and I assume you – hold dear. 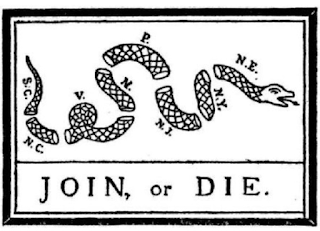 
“There is no safety for Conservatives but to assume every evil of Liberals.”